An evening with DREAM THEATER 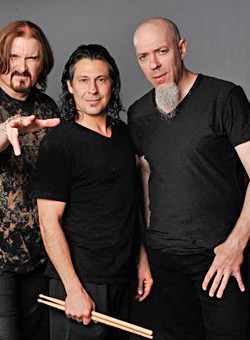 We are most happy to invite you to the concert of DREAM THEATER who will perform for the second time this year in Poland! In July the band will appear in the beautiful venue of GDYNIA ARENA!

With over ten million albums and DVDs sold DREAM THEATER have belonged to the hard rock giants exclusive circle for a long time. Such albums as Images & Words, featuring a hit single Pull Me Under, have been met in the world with delights at the combination of musicality, power, and virtuoso experiments. The Rolling Stone magazine included DREAM THEATER in the list of the ten best progressive rock bands ever.

DREAM THEATER originated in October 1985 from one of get-togethers of a group of friends from Berklee School Music – John Petrucci, John Myung and Mike Portnoy, who agreed that there was some music they all liked and wanted to play together. They invited a keyboard player, an old school friend Kevin Moor, and set up a band Majesty. In November 1987 a vocalist Charlie Dominici joined them and this is how – having changed the name into DREAM THEATER – the new band was born.

Today, after almost 30 years of their career and few group members’ reshuffles, DREAM THEATER are one of the most important rock bands of the past decades; their concerts easily fill the world biggest venues to the brim. Musicians who create this Canadian-American quintet, apart from outstanding music writing talents can boast extraordinary technical skills which are a hard-to- imitate model for other music kindred spirits.

Their previous concerts in Poland attracted crowds of fans! Last time they performed in the mid-2011 and at the beginning of 2012, just after a major reshuffle of the band cast.  In autumn 2010, one of the group founders – a charismatic drummer Mike Portnoy – left DREAM THEATER; and although already in January 2011 Mike was willing to join the band anew, the rest of the group members did not approve of this idea. Besides, only a month after Mike had split with his mates, DREAM THEATER  organized a three-day auditions in New York, during which they played, improvised and talked with seven artists who belong to a narrow circle of the world best percussionists. This helped them see the drum players from musical, professional, and personal perspective, and estimate how each of the auditioned musicians would fit into the band’s style.

In spring 2011 DREAM THEATER presented their fans with a documentary on the audition process for a new drummer on the Internet. On 29 April, 2011 it was revealed that after a thorough analysis of all seven candidates the position of the drummer would go to Mike Mangini, who had recorded with Annihilator, Extreme, Steve Vai, Joe Satriani, Erik Johnson, and many others.

In autumn 2011 they released their first studio album recorded with Mangini, A Dramatic Turn Of Events, which proved beyond all doubt that the band was in prime form. The album was well received by the critics; amplitude of melodies, excellent arrangements and sound concepts, musicians’ – including sometimes criticized James LaBrie – great condition; all that contributed to this best-for-years release.

On 24 September, 2013 Roadrunner Records announced the premiere of a long anticipated album of the band. This first record in their career which bears just the name of the group as the title of the album was recorded in Cove City Sound Studios in Glen Cove  (New York). It was produced by guitarist John Petrucci and mixed by Richard Chycki ( Aerosmith, Rush).

“I see every new album as an opportunity to start over,” says Petrucci. “To either build or improve upon a direction that has been evolving over time or to completely break new ground. This is the first self-titled album of our career and there is nothing I can think of that makes a statement of musical and creative identity stronger than that. We’ve fully explored all of the elements that make us unique, from the epic and intense to the atmospheric and cinematic. We’re incredibly excited about ‘DREAM THEATER’ and can’t wait for everyone to hear it.”

After the new record announcement the musicians – as always – hit the road and kicked off with their massive world tour. Luckily, Poland has been included in the tour, and the band performed on 5 February, 2014 in “Spodek” in Katowice. The concert was received so enthusiastically that the artists decided to come back again this year. This time we will have a chance to meet them in holiday vibes at the Polish sea. Join the band for another almost-three-hour long show “An Evening with…” in GDYNIA ARENA. Let the magic be back!